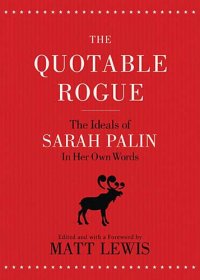 I have been a fan of Sarah Palin since she entered the running for Vice President in 2010.  I thought reading a book with a bunch of quotes from Sarah's feisty mouth might just be interesting.  For the most part, I was right.

Now I don't know too much about politics and the like, so some of this stuff I didn't even know what she was talking about.  But the parts that I did I thought that most of it was pretty funny, witty, true or thought provoking.

One of my favorite quotes was one that she made about Vice President Biden.  It was one that made me chuckle out loud.


If the election had turned out differently, I could be the one overseeing the signing of bailout checks and Vice President Biden could be on the road selling his book Going Rogaine.

If you are interested in, or if you like what Sarah Palin has to say, you should read this book.  It is enjoyable and can even help you learn something. You can read quotes from Sarah on topics like abortion, Barack Obama, Education, Media, Family and much more.

I received this book for free from Book Sneeze in return for my honest review.
Posted by Danielle Leigh at 9:39 PM