Over The Top Part II

After we returned to the Women of Faith Conference 2011 from lunch we were privileged to hear Patsy Clairmont and Andy Andrews speak more.  The session before we took a break for dinner was the Q&A with them.

All of this time, there is a little area next to the stage, it's been sectioned off with chairs inside.  So far, no one has used that area except Andy Andrews who kneeled over a chair.

After the Q&A it was time for dinner.  Dinner started at 3:30 and the evening session didn't start until 7:00, so we had a few hours to ourselves.  We walked to a restaurant that wasn't far from our car.  Our mistake was staying there and eating.  We should have turned right back around and gone somewhere else.  The food was gross, the decor was horrid (Carrie liked the ceiling tho) and the waitresses belonged in a totally different dimension than the one we were in.  Especially the new girl.

We were freezing and it was pouring.  It was also getting dark and we didn't want to be walking the streets of Seattle at night.  So since we had so much time, we sat in the car with the heater on for a while to warm up.

When the evening session started we were warm and cozy in our assigned seats and waiting for the drama to begin.  The drama was very real to us!  It was about all the different hats that moms wear.  Oy, it exhausted me just watching it!  The drama was performed by Katharine Everett and she was new to the Women of Faith team.  She did a really good job I thought.

We, as moms and wives, do wear soooo many hats!  Sometimes we have to wear more than one at a time.  And as uncomfortable as that can be, we get it done.  Albeit, there are the occasions when we make it through with less hair than we had before, or another layer of enamel ground off our teeth (I'm a teeth clencher when I'm mad).  But we make it through!  And we're ready for another day of non-stop hurdles.

Now the section that had the chairs in it next to the stage was filled.  It was called The Porch.  It is where the Women of Faith ladies sit during the conference.

Before our evening concert, we had another session with Andy Andrews.  I really enjoyed his speaking and I sincerely hope to see him again. 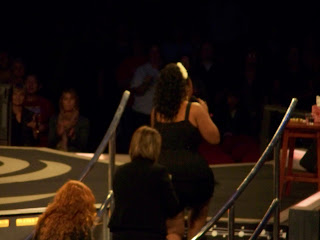 And then, the concert.  We've all been waiting for Mandisa to come out.  I liked her since her song My Deliverer came out.  And what a doll!  She made me giggle and giggle because she was just so cute!  Our seats were behind the ladies that sat on the porch, so when there was music going from the praise and worship gals, Mandisa was down there just a dancing!  I got pics of that, even though it was from behind, she still was a cutie!!

I enjoyed the concert that Mandisa put on.  She is a fabulous performer. 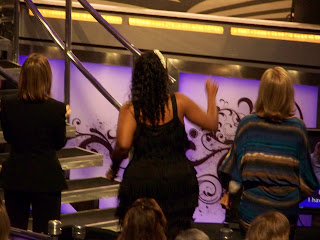 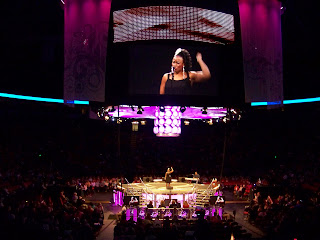 Ok I have to add something here that I didn't like about the music.  I didn't like the use of the worldly songs.  I just don't think they fit into a Christian conference.  The worst was when Mandisa was singing a medley and they were all contemporary music.  One song in the medley I was even shocked to hear.  It was Beyonce's song All The Single Ladies.  I just don't think that fit!  I'm sorry, it may be my Baptist views, but it didn't belong.

When the concert was over, we sleepily shuffled out and back to our car.  Now the fun part, finding our way out of Seattle and to my dad's house.  It took us a bit, but we finally did it.

At my dad's house we got all of our stuff ready for the night and chose where we'd sleep.  Then we laid down and talked.  We talked and talked.  I think it was about 1:30am and I said, "I'm tired."  I got up, turned the lights off and laid back down.  We kept talking and talking.  Before we knew it, it was almost 4:30am and we were still awake!  The morning session started at 9am and we were planning on leaving my dad's house at about 7:30-8am.

We didn't move at any great speeds when we did wake up.  We took our time and got ready.  We made it to the event about 10 min. before the morning session started, so we did pretty good.  And for as little sleep as we got, we weren't feeling too bad.  Of course, Starbucks coffee and a BAWLS energy drink are good for helping you stay awake too. 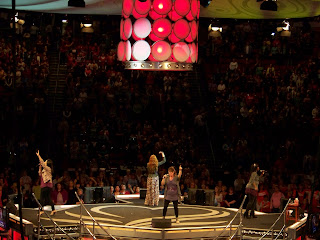 Posted by Danielle Leigh at 9:38 AM

Email ThisBlogThis!Share to TwitterShare to FacebookShare to Pinterest
Labels: Women of Faith Conference