Over The Top Part I

Where do I begin?  As my good friend Shannon would say, or sing actually, "Let's start at the very beginning. That's a very good place to start."

She sings that to me all of the time.  It's a good thing that she sings well! ;-)

A good friend from high school went with me to the Women of Faith Conference 2011.  We haven't seen each other but for a brief half hour when they visited here, since we graduated from high school.  Ok, so I'm not going to tell you exactly how long that's been, let's just say it's been a while.  But being with Carrie just brings me back to high school.  When we used to drive around in my mustang and sing our hearts out!  We were either going to church, youth group, a youth activity or just having fun.  My lil sis often joined us on those fun trips.

It's amazing to me to be apart from someone that long and just go right back to where you left off.  And that's what we did.

We laughed together so much, which is the most important part of having fun with a friend.  Like the time we had just arrived and parked the car in Seattle.  We walked halfway to the Key Arena, and Carrie asks me, "Were you supposed to put something in the windshield for parking?"

"NO!  I was supposed to PAY!"  So we walked back so I could pay.  The slot would not accept my money.  I tried and tried and tried.  We laughed.  Then realized that I was putting it in the wrong slot.  When we found the right slot, it went in easily.  Back to Key Arena. 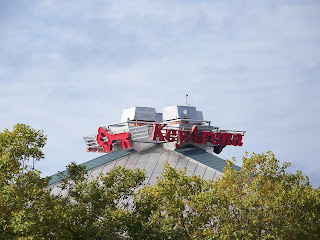 Walking into the Arena was another challenge for us.  The morning started with general seating.  Assigned seating didn't start until the evening session.  So our toughest decision now was, where should we sit?  We chose a spot that was near the front, but not so near that we're craning our necks.  It wasn't very far away from our assigned seats, but we couldn't find those yet.

I noticed the cost of food as we walked by.  I was a little hungry.  But gee willikers it was $6 for a hot dog!  I can buy a whole pack of hot dogs for less than that at the store people!  It was just ridiculous.  A bottle of water was $4.  Unbelievable.  So I didn't eat.  ha ha ha 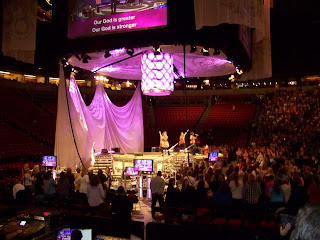 When we sat down and got to look at the stage, it was beautiful.  I really like it.  The morning session was only open to the 3 sides.  The evening session the curtain in back was down and they used the whole stage.  The beautiful light in the middle changed colors.  I loved it.

Just a sec, I have a kitten desperately trying to get my attention........

The picture here is of the singing girls.  They led us in praise and worship.  And did quite a fabulous job.  I enjoyed three of them very much.  There was one, and I'm not saying who, that I just didn't care to watch sing.  But that is my own stupid preference and oddity so I don't need to share.

Patsy Clairmont opened the show.  If you've never seen or heard her, you have to!  This was my first and I am hooked!  What a little spitfire!  A sassy little cutie pie!  I just want to squeeze her!!  I can identify with her on many aspects.  I appreciate women who get up in front of millions and can be honest about their own shortcomings.  She can do that honestly and hilariously (is that a word?) at the same time!  I laughed and cried listening to Patsy.

And then she introduced Andy Andrews.

Let me start by saying this. I really enjoyed him.  He had great points and was, shall we say, interesting to watch.

Any of you ever seen Andy Andrews speak?  He's an author.  Check out his books, they look AWESOME!  I really want to read The Traveler's Gift.

Now I'm going to say this.  When Andy started speaking, I just about had a panic attack!  Seriously.  He made me very nervous.  The man just would not sit or stand still!  At one point, I thought he was going to fall over the hand railing and off the stage!

He made me laugh though!  He walked out in the crowd and talked to people.  Two of the stage guards were included in his conversation often.  It was funny.  And he had some really great lines that I took away with me.

Ignorance from principles doesn't keep you safe from those principles.


Fear is the misuse of the creative intelligence God gave you.


He also said something that opened my eyes with the relationship between my husband and I.  Something that I need to fix.  Andy stayed with us all day on Friday.  I was blessed by his sessions as much as panicked!  :-D

Ok, now it's time for the negative.....lunch.  First, the sandwich was just disgusting.  And the unorganization of getting our lunch.  I felt like a penguin, standing all huddled up in the snow storm.  Only we were just slowly pushing through to get our lunch that was a gross sandwich.  We only ate our sandwiches because we were so hungry!

Email ThisBlogThis!Share to TwitterShare to FacebookShare to Pinterest
Labels: Women of Faith Conference