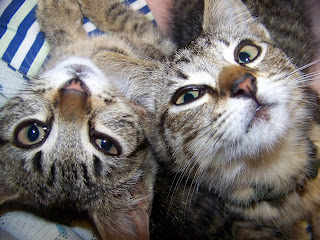 Yea, I know, I've heard the comments before.  I'm going to grow old and become the Crazy Cat Lady.

Our cat family has changed recently.  On July 22, I put my cat Solomon outside early in the morning because he wanted out.  That was the last I saw of him.  It broke my heart.  He was my baby kitten!  We only had him for a little over a year.  He was so special to all of us.  He was OUR baby.  The whole family spoiled him.  I have avoided writing about this so far because I was so sad.  I still am.  I miss him.

So to appease my wants and desires, my fabulous hubby said that we could get another kitten.  He wanted a male kitten for him to name himself.  So I told him that was fine, I'd share.  But then I found a brother and sister pair and decided, why not take 2?  One for each of us!  So we did that! 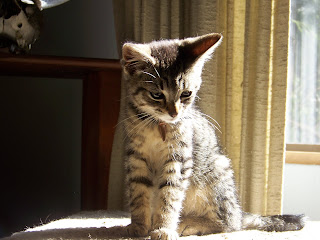 Now we have two cute little gray tabbies.  They are adorable!  Hubs named his Seargent Gunnery Hathcock.  He is pictured here ------------>      I decided to be witty and keep the theme going so I actually decided on a name before I got her.

I never do that!  I like to meet them and observe them before I choose a name.  But I knew what I was choosing this time.  It had to go with hubby's theme.

So what is the magical name? 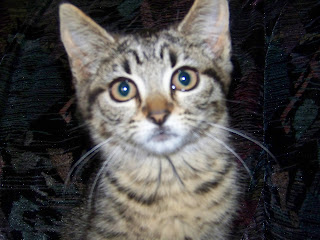 And here is the beautiful Mags, Maggie or Mag Pie as I affectionately call her:

I just love kittens!  And these two are so cute!  We are nursing Gunny back to good health now.  I don't know what happened to him, but he had stopped eating and drinking after he was here a day or two.  I got him some soft food and Pedialyte and he is doing much better now.  He's coming to life!  He has been just sleeping and laying around.  Poor little guy.  I don't know what the problem was.  But I am so thankful that Jesus gave me brains and I was able to make him feel better than he felt yesterday.

And just to show them off even more, I have another picture of both of them to post in this post.