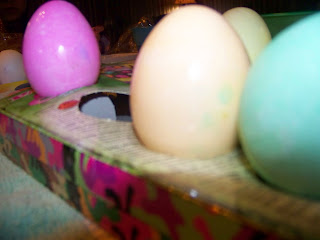 All year long we eat them.  Deviled, scrambled, fried, poached, hard-boiled.  But once a year the eggs become part of a religious tradition to many Christians.  The egg itself is not something that we worship.  But the egg serves as a reminder of the time of renewal, rebirth and new life.  Coloring the eggs represents the new and beautiful colors of Spring.  What a glorious and wonderfully colorful way to decorate for Easter!  And for some reason, an Easter egg tastes so much better than just a regular boiled egg. 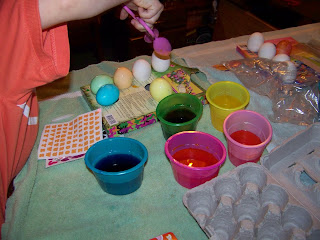 I have been standing over the kids taking pictures while they are decorating their eggs.  I am so glad that they are finally to the ages that I don't have to help them once things get going.  I get it set up and teach them where to start and off they go!
It is so neat to watch them use their imaginations and be creative.  I will never cease to marvel at the wonder of the beings that came forth from my womb.  It is amazing.  That makes me think back....
I can't imagine watching your son being brutally beaten.  How heartbreaking for a mother.  I wonder if Mary was every angry at God....just for a second.  Ok...honestly, I don't want to go there, it makes me want to cry to think of it. 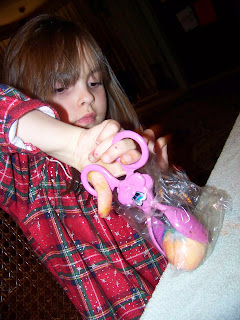 Something that I can bear to think of is my cat.  It is so nice to have him home!  We've given him his favorite blanket that I actually bought for him to lay on in the laundry room on top of a sleeping bag that needed to be washed.  It smelled of us and was on the floor when I brought him in, so I let him use it as a squishy comfy bed.  He sleeps in here most of the day.
Every now and then he will crave some attention and limp out to my living room and sit either in here with us or in the bar where the kids school stuff is.  Then after bit he'll go back into his bed.  He finally went to the bathroom last night, at least the first to my knowledge since he's been home.  I wondered how he would fair so I went in and checked on him.  I also wanted to know what kind of bathroom he was doing to keep an eye on him. 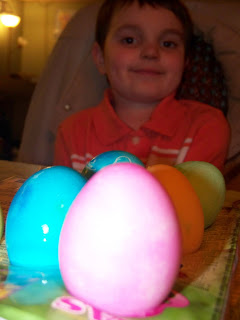 I went into my bathroom, where the litter box is, and listened....and listened....and listened.  Not wanting to be rude and actually peek in on him (because my litter box has a lid) I quietly asked "Hemi, what are you doing in there?"  But I didn't get a response.
So I decided I was going to have to invade his privacy.  I peeked in the box and Hemi was just sitting in there.  I watched to see if he was just chillin' or stuck.  I thought "eh, who knows?  He is a male, maybe he just wants to hang out in the bathroom for a bit."  Then he came out, but (I won't go into detail) it was obvious that he had to go on himself because he could not hold himself up.  I cleaned him up along with everything else.  Then I decided that he was going to need my assistance the next time.
So today when I saw him heading in there, I went in after him.  I took off the lid and after he got himself into the box, I supported him.  And I was totally shocked that he let me.  Now that is some trust right there!  How many cats would let you assist them in the litterbox?!  Poor guy.
So I will be helping my poor Hemi for a few days or so.  That is ok with me.  I would rather assist a cat in the litterbox than have him gone.  You just can't complain about some things. 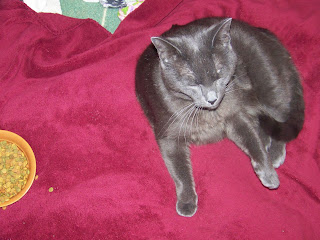 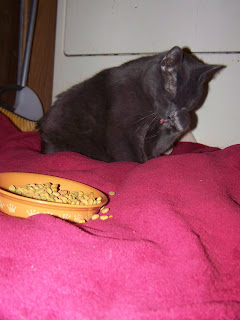 Tomorrow for Easter my church is having an Easter breakfast.  The men of our church cook some of the food and serve the breakfast.  The kids and I will be going down for breakfast and afterward we will go to Sunday school.  I will leave my Sunday school class a little early to come back home and pick up Greg.  My assistant teacher will stay with the kids.  For the service I will be playing 3 songs with the hand bells.  I love doing that and the songs sounds so pretty sometimes.
Greg's cousins are going to meet us there for breakfast in the morning.  I bring their little girl to AWANA.  We invite them to church on the special days when we are pretty sure that they will come.  So they are going tomorrow.  Which is good!  We wish that they would come every Sunday.  This will be the first time that they will have made it to one of my bell performances though.
Well for the rest of this evening I am going to be doing laundry, cleaning up egg dye mess and getting things ready for tomorrow.  My father-in-law got some Easter baskets for the kids, I wasn't getting any this year, so I will put those out for them after they are in bed.  Then I will get up early in the morning to hid their eggs.  Now I am going to finish getting my pictures into this blog post.  Blogger sure has made that harder lately!

Posted by Danielle Leigh at 9:58 PM