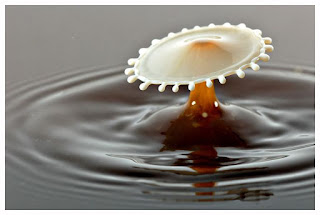 Yesterday I blogged about trying Teeccino.  When my hubby got home, I told him to try it.  Now, my hubby is not a coffee drinker because he thinks it's too bitter.  But I decided to try it with some cream and sugar last night and I didn't care for it that way at all!  But I thought he would so I gave it to him and he downed the whole cup!  Than told me yep, I'm right, he wouldn't be able to tell it wasn't coffee but it wasn't as bitter.  He might just think it was a different flavor.
So far, in most of my healthy food/diet changes, he hasn't liked it.  He doesn't like butter better than margarine, the organic cookies taste stale to him (except for the peanut butter and organic oreo like cookies), even though he agrees you can barely tell the difference between ground turkey and ground beef he still wants to eat the beef.  I was shocked to hear him say that it was something he liked!
Then when I told him that it still had a natural energy boost and also include inulin, which has many healing and nutritional qualities, he was all for it!  To check out the ingredients used and their properties go here.  To check out the health benefits go here.
After my father in law came over, which he does every night and drinks my coffee, I tried a little test on him.  I told him I bought a new kind of coffee and to try it.  He said that it was really good!  Then he asked me what I bought.  So I showed him the package and explained it to him.  He was impressed that it was healthier for you and said he'd buy some.  I told him you have to order it and he said when I order mine to let him know so he can order some.

Now I just have to finish drinking my Starbucks Breakfast Blend that I bought......lol

Posted by Danielle Leigh at 8:58 AM

Email ThisBlogThis!Share to TwitterShare to FacebookShare to Pinterest
Labels: Teechino

I have drank it.. was OK... But with our hectic schedules and lack of sleep we have to have coffee... This stuff is allot healthier than Decaf. Decaf I have read has a link to cancer... Cool post!